Following the previous meeting, the PCS Scotland Black Workers Network have announced details of their next network meeting.

All black members are invited to attend the meeting on Thursday 25th October in the PCS Scotland office, 145 West Regent Street, G2 2SG. The meeting will be held between 5pm and 7pm with attendees invited to join the PCS Scotland Young Members Network for the showing of Moonlight as part of this year's Black History Month celebrations.

The meeting will be an open forum for members to discuss workplace issues facing our union's black members as well as reports from the STUC Black Workers Conference and PCS National Black Members Seminar which will be taking place prior to the meeting.

Members who may require additional support to attend this meeting are invited to contact Ruby, Organising Officer for the Network, at ruby@pcs.org.uk. All efforts will be made to accomodate any requests. 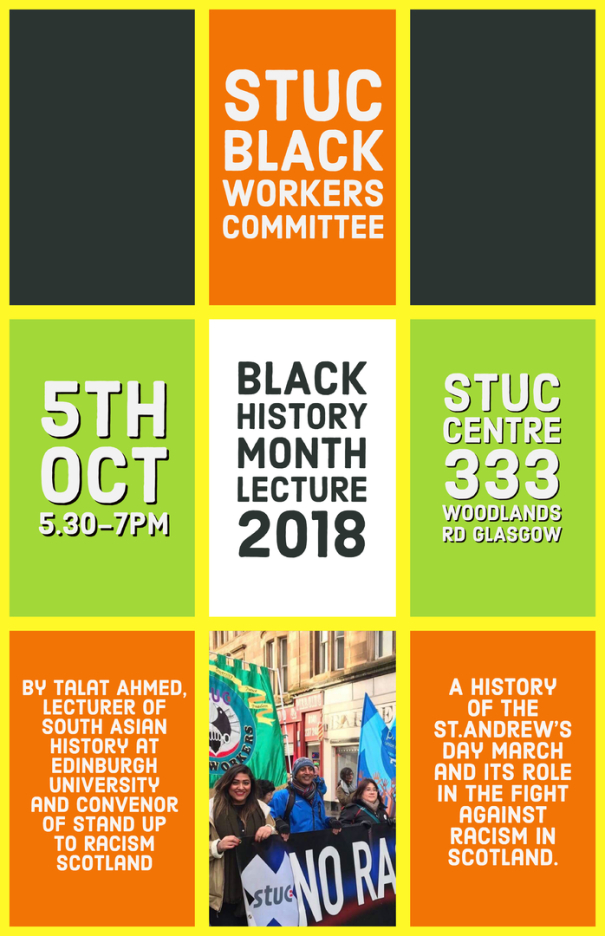 This year's lecture will be delivered by Talat Ahmed, Lecturer of South Asian History at the University of Edinburgh and Convenor of Stand Up to Racism Scotland on the history of the St. Andrew's Day March & Rally and its role in the fight against racism in Scotland.

The event will be held in the STUC building, 333 Woodlands Road, G3 3NG with doors opening from 5:30pm. The event is free to attend, all are welcome.

The 2018 PCS National Black Members Seminar will be taking place on the 6th and 7th October in the Hilton Hotel, Milton Keynes.

PCS Seminars seek to encourage greater participation from members in under represented groups, integrating PCS campaigning and organising priorities to invole members in the work of our Union.

The theme of this year's Seminar will be "50th Anniversary of the Race Relations Act - How far have we come and how far can we go?"

Costs for travel, accommodation as well as evening meal and breakfast will be met centrally by PCS Equality Department with limited childcare facilities available.

All Black members interested are encouraged to apply using PCS' new online registration. In the event the event is oversubscribed then a sift will be held to select successful delegates.

The closing deadline for applications is 12 noon on Wednesday 5th September 2018.

Black* members are invited to attend the first meeting of the PCS Scotland Black Workers Network on Thursday 23rd August.

The meeting will be held in the PCS Scotland office, John Smith House, 145 West Regent Street, Glasgow, G2 2SG and will begin at 6:00pm and finishing no later than 7:30pm.

The purpose of the meeting will be to give members the opportunity to shape the structure of the network and to meet fellow black members from across Scotland.

Light refreshments wil be provided. Any member requiring additional support to attend should contact Ruby, Organising Officer for the Network, at ruby@pcs.org.uk.

*PCS uses black in the political context to encompass those from African, Asian, South American and Middle Eastern backgrounds. 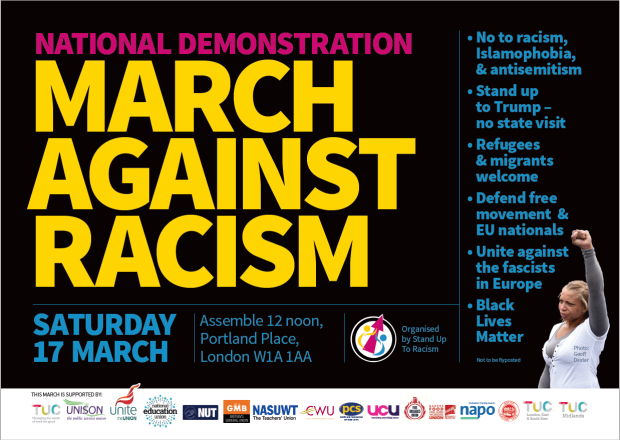 The UN's International Day for the Elimination of Racial Discrimination began in 1966 to commemorate the 1960 Sharpeville massacre which saw 69 anti-apartheid protestors killed and 178 wounded following protests against the regime's racist pass laws.

In remembrance of the massacre, the UN General Assembly called on all world states and organisations to participate in a prgram of action to combat racism and racial discrimination.

This year's event is being organised by Stand Up to Racism and will be taking place on Saturday 17th March with a March arranged from Holland Street at 11:30am followed by a public rally in George Square.

All PCS members, family and friends are invited to attend and join fellow PCS members to stand up agasint all forms of racism and racial discrimination. 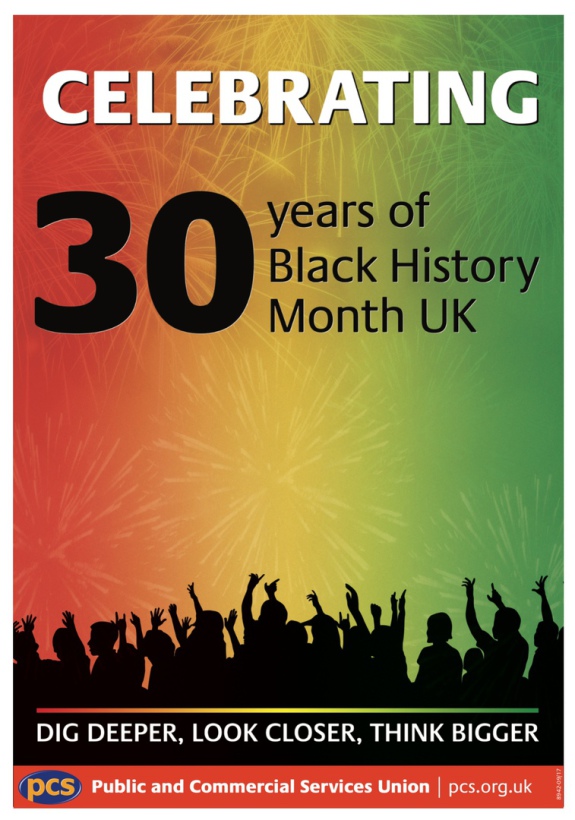 Black History Month is an annual event that takes place during every October in the UK. It serves as an opportunity to focus on the achievements and contributions from the Black community and reflect on the path towards full race equality so far and the challenges that remain.

This year marks the 30th anniversary of Black History Month which began in the USA and since it began has grown to incorporate the history of Africa, Caribbean and Asian communities who share a link with the UK through the history of slavery, colonialism and migration.

Black History Month is a chance for all PCS members to remember our history and stand in solidarity with fellow members and the wider black community, renewing our commitment to tackling inequality and opposing racism.

You can show your solidarity using the photo opp cards available below to show your support via social media, use #BHM and by tagging @pcs_union and also by sharing the ten key facts about Black History Month helpcard to raise awareness of the importance of BHM. 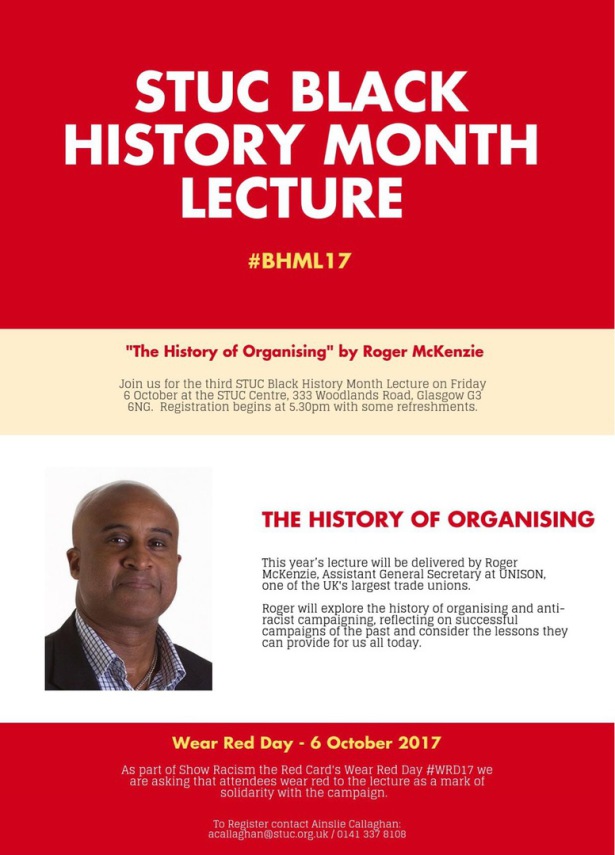 As part of this year's Black History Month the STUC Black Workers' Committee will be hosting their third annual Lecture with special guest Roger McKenzie, Assistant General Secretary at UNISON.

The lecture will explore the history of organising and anti-racist campaigning, looking at successful campaigns and the lessons we can learn today.

The event will be held at the STUC Offices, 333 Woodlands Road, Glasgow, G3 6NG with registration open from 5:30pm and lght refreshments provided. Register to attend today by contacting Ainslie Callghan at acallaghan@stuc.org.uk or by calling 0141 337 8108.

As part of the day all attendees are encouraged to wear red as part of Show Racism the Red Card's Wear Red Day to show their support and solidarity with the campaign.

The 2017 PCS Black Members Seminar will be taking place across the weekend of Saturday 7th and Sunday 8th October in the Novotel hotel in Leeds.

This year's Seminar theme will be 'Celebrating 30 years of Black History Month.'

Each PCS equality seminar consists of a variety of guest speakers, workshops and discussion groups to encourage delegates to get involved and are aimed at members who are newly active or would like to become more active in PCS.

Applications are also positively encouraged from balck members who also identify as LGBT, disabled or young members who are often under represented at Union events.

The closing date for applications is 12pm on Monday 11th September 2017 with successful delegates notified for Friday 15th September. All travel and accommodation costs will be met centrally by PCS. If you have any additional requirements then you can contact PCS' Equality Department at equality@pcs.org.uk. 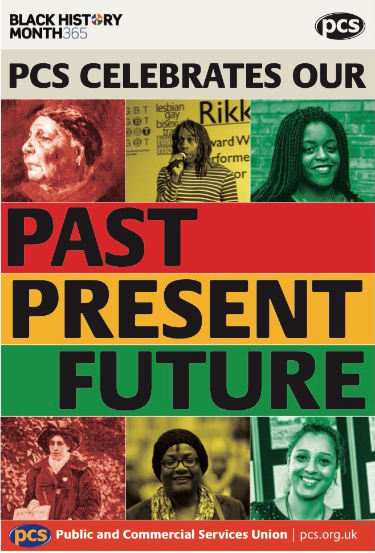 Held every October in the UK, Black History Month is an annual celebration that puts the focus on the contribution and achievements of the Black community, often overlooked or hidden by the mainstream whoch has been taking lace for over 30 years.

For 2016, PCS has chosen the theme of Past, Present and Future. Particularly important following the recent rise in racist attacks seen across the UK in the run up to and following the EU Referendum.

PCS as a Trade Union places equality at the heart of everything it does, standing up to racism and discrimination, challenging stereotypes and promoting equality.

A look at our shared history shows many members of the Black community that we can all be proud of. Mary Seacole, nurse in the Crimean War; Ignatious Sancho, writer, musician and businessman; Olaudah Equiano, political activist, Sophia Duleep Singh, suffragette.

And with the rise in racism and discrimination as well as rising inequality throught the Government's ongoing austerity agenda, the stage is set for the next generation to take their place in history.

For more details on PCS' equality work, speak to any local rep who can direct you to the relevant equality group or groups you are interested in.

PCS' Annual Black Members' Seminar will be taking place on the weekend of the 8th and 9th October in the Novotel Hotel in Birmingham.

The black members' group seminar will seek to set the agenda for the Network as well as foster closer working with the national, regional and group networks and advisory committees in line with PCS' national campaigning and organising priorities for our Union.

Seminar is aimed at active or newly active black members who want to build and develop themselves in order to become more active in PCS, applications from those in PCS' other under represented groups are actively encouraged. PCS will meet the costs of travel and accomodation for delegates.

For any members interested in applying, please find the required forms below. Please note the deadline for applications is 12 noon on Friday 9th September.

If anyone has any questions regarding seminar or the work of PCS" young members network then please speak to a local rep.

International Day for the Elimination of Racial Discrimination

As part of the UN's International Day for the Elimination of Racial Discrimination, Stand Up to Racism are organising major demonstrations in Glasgow, London and Cardiff to coincide with demos that will be taking place around the world.

The event in Glasgow will be organised in conjunction with Unite Against Facism Scotland and the Glasgow Campaign to Welcome Refugees to create a huge demonstration against racism.

The demo will assemble in George Square from 11am and we encourage everyone to join us to send a clear message that PCS is opposed to discrimination against minority communities in Scotland, as well as across the UK and the rest of the world.