PCS Scotland's Women's Network invite all members to join them on Thursday 10th May for a quiz night aimed at raising funds in support of the Repeal the 8th campaign in Northern Ireland.

The campaign is aimed at supporting efforts to remove the Eighth Amendment from the Irish Constitution to ensure women are able to access appropriate care when the face the difficult choice of undergoing an abortion.

PCS believes that all women have the right to choose and this event is intended as a show of solidarity with campaigners in Ireland as part of the Together4Yes campaign.

The event will begin from 7:30pm on Thursday 10th May in The Raven, 81-85 Renfield Street, G2 1NQ and is open to all PCS members who support the aims of the campaign and a women's right to choose.

This year's PCS National Women's Seminar will be taking place on the weekend of the 23rd and 24th June in the Holiday Inn in Milton Keynes.

Applications are open to all PCS women members with the costs of travel, accommodation and meals met by PCS centrally, limited childcare spaces are also availablefor children between 6months and 14 years.

The theme of this year's Seminar is "Empowering Women" and will look at what barriers there are and how we can overcome them for women members, particularly looking at the issues of digital bullying and sexual harassment. The weekend will consist of a variety of workshops and discussions as well as keynote speakers.

Registration will open from 1pm on the Saturday for a 2pm start, finishing no later than 1pm on the Sunday to allow delegates to travel home.

The closing date for applications is 12pm on Friday 18th May 2018. Nominations can be submitted online here. If you require paper copies then email equality@pcs.org.uk.

If any member would like more details regarding PCS' equality work then contact a local rep who will be able to assist. 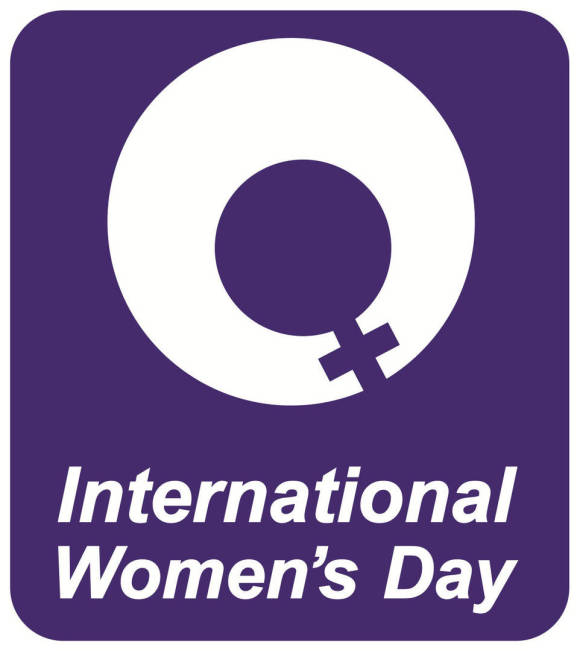 First celebrated in 1911, International Women's Day celebrates the social, political and economic achievements of women while focussing attention on those areas that still require attention in the ongoing fight for gender parity.

This year marks the 100th anniversary of women being given the right to vote and to being allowed to sit in the UK parliament as MP's (however not all women). Since then there have been many positive gains in the fight for women's equality however today's world continues to be unequal for women.

For this year's International Women's Day PCS have chosen a theme of "Press for Progress". Today there are several ongoing campaigns led by and involving women, such as #MeToo, #TimesUp and #EqualPay with a strong, and building, global momentum for greater gender equality.

Now, more than ever, there is a strong call to action to press forward and continue the press for progress towards improved gender parity and for all members, family and friends to consider how they can play their part to create a more gender inclusive society.

Our Branch Womens' Advisory Committee will be organising events within the Branch as part of this year's International Women's Day, members can also help show their support by using the Photo Opp Cards, available below, and sharing their photos through social media using #PCSIWD18.

For more details, or to get involved, in our Branch women's equality work then email us at members@eastkilbridepcs.org.uk using the subject heading "BWAC" and your details can be passed on to our Branch Women's Advisory Committee to get in touch with you. 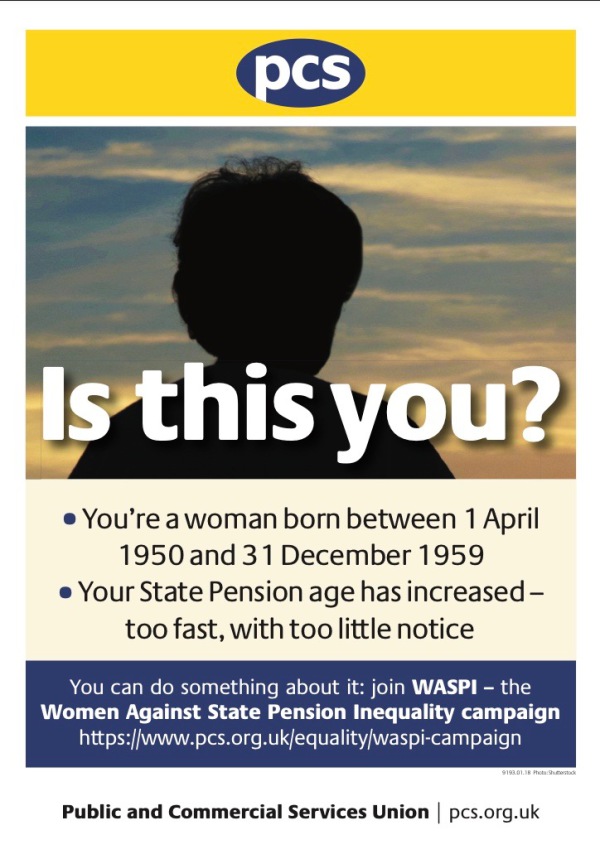 The Women Against State Pension Inequality (WASPI) campaign was started to fight against the unfair treatment of women born in the 1950s (on or after 6 April 1950) through an increase to their state pension age.​​ The changes were drawn up with little or no personal notice, with a faster than promised implementation and without enough time for women born in the 1950s to make alternative plans. Thousands of women will not receive their state pension on the date they planned for, and will have to work longer than expected or could face financial hardship in retirement.

Many PCS members are directly affected. The public sector pay cap has effectively led to a wage cut. This makes it more difficult to plan for the future when you are already dealing with meeting everyday costs.PCS continues to work to break the public sector pay cap and lobby government ministers through our Parliamentary Group.

For more information on who WASPI are and what they are doing visit their website.

Government advisors were clear that changes like this should only happen with at least 10-15 years’ notice but in practice, notification letters were only sent out to affected women 14 years after the 1995 Pensions Act in 2009.

Many received this information with just one year’s notice of the change.

Very many others received only 3, 4 or 5 years’ notice and many women report receiving NO letter at all.

The WASPI campaign is clear that it supports the equalisation of the state pension age between men and women but does not agree with the unfair way the changes were implemented.

Although men have also had their state pension age changed too, this campaign is about women. That is because in terms of formal notice it is clear that women have been treated unfavourably compared to men. A large percentage of these women were given as little as one or two years’ notice of up to a 6 year increase to their State Pension Age, compared to men who received 6 years’ notice of a one year rise in their State Pension Age.

WHAT CAN YOU DO?

Those who are affected by the changes born between 6 April 1950 and 31 December 1959 can do the following:

‘WASPI women’ are beginning to overwhelm the DWP with their official letters of complaint, which form part of the legal action that WASPI is taking against the government. The WASPI campaign has developed guidance on how you can make a formal complaint to the government department responsible for this maladministration.

If the complaints are successful, the Parliamentary Ombudsman can recommend that the government restore the women who have complained to the same financial position as if the maladministration had not happened.

It may be that the Parliamentary Ombudsman could recommend compensation for all women affected by the pension age changes, but there is no guarantee that this will happen. So, to be sure of receiving any possible future compensation, WASPI recommend that everyone affected should take action and send in their own complaint to the DWP. 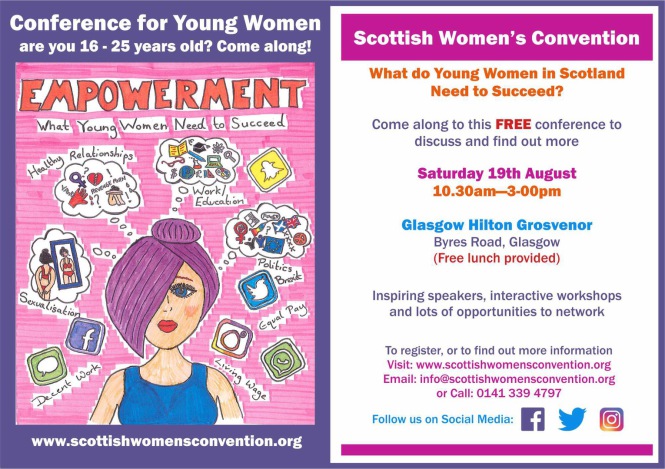 The event is free and open to women aged between 16 and 25. Members interested should register by calling 0141 339 4797 or emailing info@scottishwomensconvention.org.

The Scottish Womens Convention is set up to communicate and consult with women in Scotland in order to influence public policy. It aims to provide an effective way of consulting with a diverse range of women in Scotland with a network of over 300,000 members throughout Scotland. For more information visit www.scottishwomensconvention.org

The theme will be “Women’s Rights at Work”.

The seminar will seek to encourage greater participation from women members and will integrate PCS campaigning and organising priorities with the particular challenges faced by PCS women members.

A variety of speakers, workshops and discussion group sessions will be spread across the weekend.

PCS fully appreciates there may be special sensitivities linked to disability and LGBT issues, and all applications will be treated confidentially.

Members can nominate themselves and an application can be found on this page. Further copies are available by contacting the Equality Department on 020 7801 2683. Alternatively you can email requests for application forms to equality@pcs.org.uk.

Registration will open at 11am on Saturday 24 June, with lunch at 12 noon and the seminar starting at 1pm. The seminar will finish no later than 1pm on Sunday 25 June.

PCS will meet the costs of accommodation, meals, and reasonable travel, including those for carers. Access requirements will be met as far as possible.

Childcare facilities will be provided for children between the ages of 6 months and 14 years, however places are limited.

Delegates are encouraged to make alternative arrangements where possible and PCS will cover the costs of reasonable childcare claims on production of a receipt from a registered carer.

Applicants must submit a supporting statement detailing why they wish to attend as this information forms part of the selection criteria.

Please note all successful applicants are required to attend for the entire duration of the seminar.

The closing date for receipt of applications is noon on Thursday, 11 May, 2017.

Please also note that all seminar correspondence will be sent by email to the email address included on the application form unless you notify us otherwise.

If you have any questions regarding PCS and the work of the Womens' Network, you can contact our Branch Women's Officer, Pauline Johnston, in confidence.

If any member is interested in joining the BWAC or the work of the Committee then please contact our Branch Women's Officer, Pauline Johnston.

The 2016 National Women's Seminar will take place in the Novotel Hotel in Birmingham on the weekend of the 25th and 26th June. This year's theme will be "Hear our Voice."

A variety of speakers, workshops and discussion group sessions will take place over the course of the weekend. Seminar will seek to encourage greater participation from PCS' women members and integrate PCS campaigning and organising priorities with particular challenges faced by PCS women members.

Seminar is particularly beneficial to members who are newly active and/or would like to become more active in PCS. Costs will be met centrally by PCS to assist members in attending Seminar and limited childcare facilities are available.

Members can nominate themselves to attend through our application process. Forms are available from local reps, please feel free to speak to any local rep for more information regarding Seminar or support in applying. 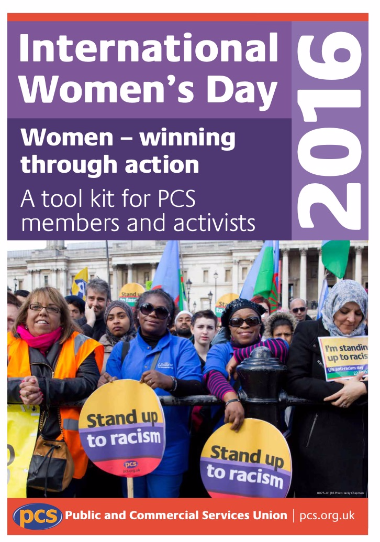 Every year March 8th is celebrated as International Women's Day. First observed in 1909 it has grown to become a global day of recognition and celebration of the advancement of women's equality as well as to reflect on the inequalities that many women continue to face in today's society.

With over half of PCS' membership being women it is vitally important that as many of our female members as possible are active within PCS to ensure our campaigns and political debate are truly representative.

Here in the Branch we have the Branch Women's Advisory Committee which serves to campaign and ensure female issues are taken seriously within the Branch. PCS nationally also have the National Women's Forum which advises the NEC as well as organising campaigns and events aimed at PCS' women members.

For more details on what the Branch does on women's issues then feel free to contact any local rep who will be happy to discuss. For details on PCS' national work, including for IWD16, then you can find more information here.