All young PCS members (those aged 27 and under) are invited to the next meeting of the PCS Scotland Young Members Network on Tuesday 9th October.

The meeting will be held in the PCS Scotland office, John Smith House, 145 West Regent Street, G2 2SG from 5:30pm.

The main purpose of the meeting will be to elect the regional convenor, area convenors and young members' representative to the PCS Scotland Committee as well as considering the priorities for the year ahead for young members in Scotland.

Those wishing to stand must be nominated by another young member, the clsoing date for nominations will be 12 noon on Tuesday 2nd October 2018.

All nominations, or any requests for further information, should be sent to Jenni Gunn, Organising Officer for the Network, at jennifer@pcs.org.uk. 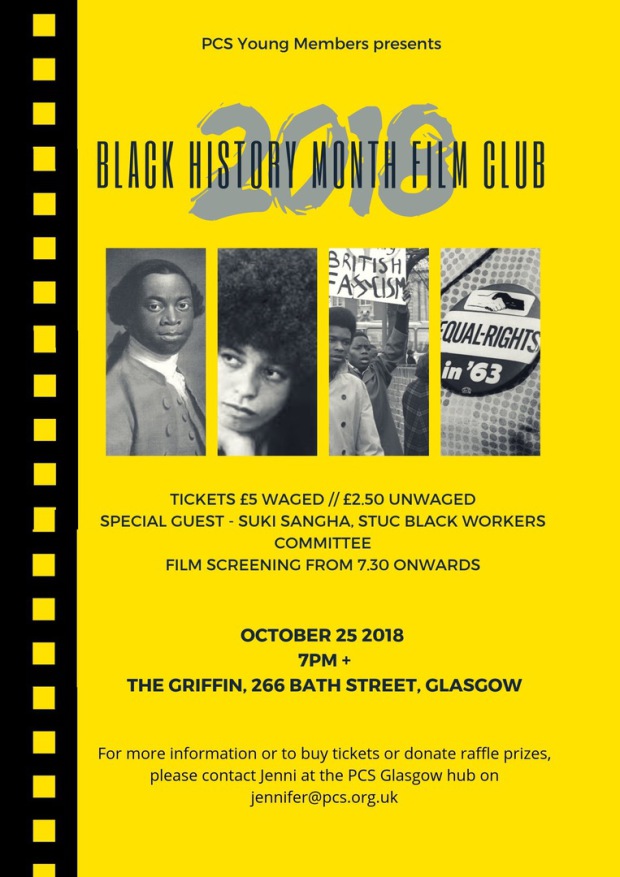 PCS Scotland's Young Members Network are launching their own film club, aimed at running events throughout the year to give members, of all ages, a chance to come together to discuss movies, politics and campaigns in a friendly environment.

The first Film Club will take place in October to coincide with Black History Month with the film Moonlight, the first film to feature an all-black cast and first LGBT+ film to win an Oscar for Best Picture. The event will also be addressed by Suki Sangha, Chair of the STUC Black Workers' Committee.

Tickets for the event are priced at £5 for waged and £2.50 for low/unwaged workers with a raffle prize draw on the night. All proceeds will go to supporting campaigning activities of the Network throughout the year.

Doors open from 7:00pm with the film beginning at 7:30pm sharp. The event will be held in The Griffin, 266 Bath Street, Glasgow, G2 4JP. For more information, or to purchase a ticket then contact Jenni Gunn at jennifer@pcs.org.uk. 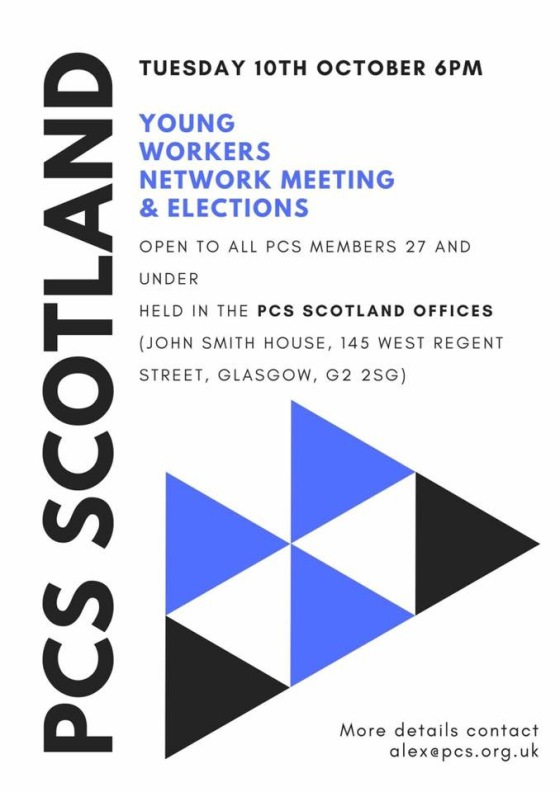 The PCS Scotland Young Members Network will be hosting their next meeting on Tuesday 10th October, starting from 6pm.

PCS' young members network is one of the most active within our Union, with recognition from across the wider Trade Union movement for their work in organising young workers.

This meeting will look at encouraging more young people to consider joining PCS and becoming more active within local Branches and will be facilitated by experienced reps and activists for those who are new to PCS.

The meeting will also be the opportunity to elect the Regional Convenor and Co-Convener for the Network as the Scotland Committee Observer with both posititions open to PCS members aged 27 and under.

Details of each role and nomination forms have been issued to all young members via email. All nominations must be received by no later than Tuesday 3rd October 2017. If members have any questions then you can contact any local rep who can assist.

The annual PCS Young Members’ Seminar will be held at the Novotel in Leeds on 16 & 17 September 2017. Registration will open at 11am on Saturday 16 September, with the seminar starting at 12 noon. The seminar will finish no later than 2 pm on Sunday 17 September. The seminar is only open to those aged 27 and under.

The seminar will seek to set the agenda for the Network, foster closer working with the national, regional and group young members’ networks and advisory committees and will integrate the PCS national campaign and organising priorities of the union with the particular challenges faced by young activists. A variety of speakers, workshops, discussion group sessions and panel debates will be spread across the weekend.

The seminar is aimed at active, newly active/interested in activity young reps who want to build and develop young members and the network in PCS. Applications are positively welcomed from young black, women, lesbian, gay, bisexual and transgender (LGBT) and disabled members who are often under-represented at union events.

PCS will meet the costs of accommodation, meals, and reasonable travel, including those for carers. Access requirements will be met as far as possible.

Childcare facilities will be provided for children between the ages of 6 months and 14 years, however places are limited and must be booked as soon as possible. Delegates are encouraged to make alternative arrangements where possible and PCS will cover the costs of reasonable childcare claims on production of a receipt from a registered carer.

Members can nominate themselves and an application form is available below.

Applicants must submit a supporting statement detailing why they wish to attend as this information forms part of the selection criteria as spaces are limited.

Please also note all successful applicants are required to attend for the entire duration of the seminar.

The closing date for receipt of applications is 5pm on Friday 25 August 2017.

If any member is interested in joining the BYMAC or the work of the Committee then please contact our Branch Young Member's Officer, Rebecca Borland.

The PCS Scotland Young Members Network, PCS' members group for those aged 27 or under, will be hosting their next regional meeting on Thursday 9th March in the PCS Scotland office.

The meeting will commence from 6pm with a provisional agenda including a possible screening of I, Daniel Blake, the role of Regional coordinators, motions for the 2017 STUC Youth Conference as well as other upcoming events in workplaces across Scotland.

All young members are encouraged to attend and get involved in taking forward the interests of young PCS members, anyone planning to attend are asked to contact Sarah at PCS Scotland to register their attendance. 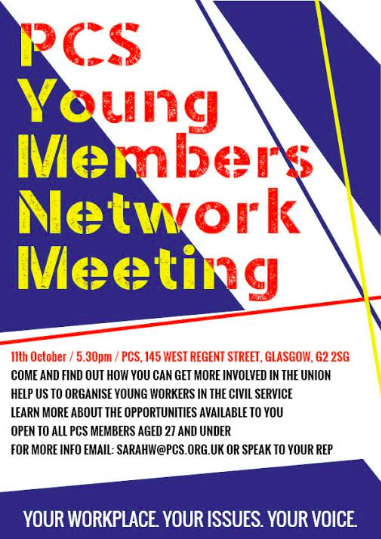 The Regional Young Members Network will be hosting their next meeting in the PCS Glasgow office on Tuesday 11th October, starting from 5:30pm.

The young members network has seen a massive increase in the number of members looking to get involved, including within our own Branch, and it is hoped that this meeting will be well attended. The young members network provides a space for those aged 27 and under to get together, to discuss specific issues that affect young workers as well as how to organise and recruit more young workers within PCS.

This meeting will involve some short activities aimed at encouraging more young people to consider joining PCS and becoming more active within local Branches and will be facilitated by experienced reps and activists for those who are new to PCS.

At the meeting elections will also be taking place to appoint both a Regional Convenor for the Network as well as an Observer for the Scotland Committee to represent young members and work with the Committee to advance the cause of PCS' young members.

Both positions are open to anyone aged 27 or under, anyone interested in nominating themselves, or the work of PCS young members network, please speak to any local rep who will be happy to assist you.

The officers of the Committee are elected annually at the Young Members Seminar, find details below, and nominations are now open. For members interested then please find details of the seats available for nomination and a nomination form at the end of this update.

Please note that the closing date for nominations is 12pm on the 5th September 2016 with the election taking place at the Young Members Seminar on the 17th/18th September.

If you have any questions regarding this matter, or the Young Members Network in general, then speak to any local rep who will be happy to assist.

PCS' Young Members group will be holding a meeting on Thursday 17th March. The event will be taking place in PCS' Glasgow office from 5:30pm.

Our young members group represents those aged 27 and under within PCS and works to help train and support younger members in getting more involved within PCS' campaigning work.

This meeting will offer an excellent opportunity for new members to learn more about the young members group, to discuss issues affecting young members and to get to know other local PCS young members.

Details for the meeting are available here. For more details regarding, or to join, PCS Young Members group then please speak to any of your local reps.